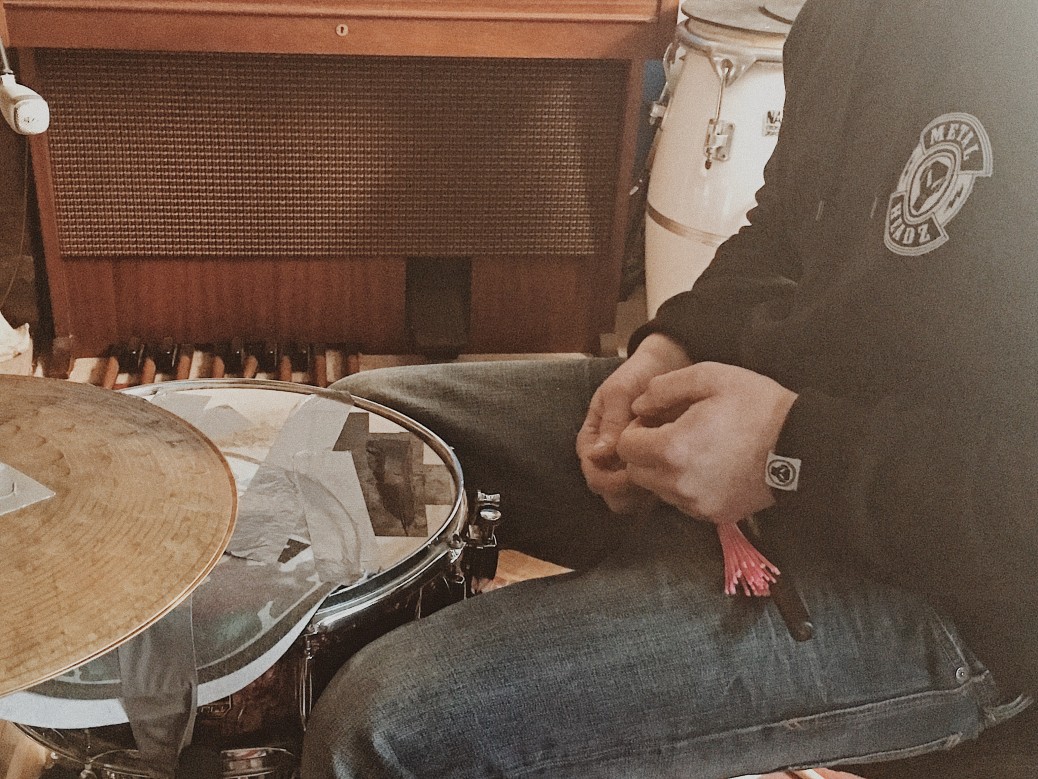 So… Finally, here at labsamples we are pulling our fingers out, and starting to step things up. We can only say that the first 2 packs were received in nothing but the best way possible. You the customers bought, used and enjoyed the packs in your numbers far surpassing any expectations i originally had. Meaning that out devotion to Labsamples is no short term thing, in fact quite the opposite, we have decided to step up and have a whole load of new original products to offer to you. These include more useful tool kits of sounds focussing on specific areas of modern day song writing and production, in particular we have been busy recording drums aimed at the heads who love their breaks, clean but still dirty, dry but still full of character, and nice and tight but still grooving!

Seems as we’re learning we thought we’d help you learn, or at least satisfy a few of your curiosities! The drum recording process is something that both myself and Jack have experienced a few times in our relatively short time on this planet, we’re not going to blag you, but please don’t think that our lack of experience means the content we recorded is nothing short of high quality, beats perfect to use in a whole variety and styles of music, recorded in a very cold but beautiful studio deep in Devon called Osmosis.

The project was facilitated by Tom Derryman, also the drummer for the project, and fellow drum and bass head. We spoke for months leading up to the recording days, a lot was said about old breaks, the sound that we have all grown up with and love, the golden years of crispy organic drums that are sampled endlessly. This is the sound that we wanted, in particular I always picked out the dry uncompromising drum sound that was crispy and warm, very little ring, and just enough room to keep it alive, its something that consistently feels missing in this day and age, unless you listen to the sounds of Adrian Younge or the Dap Kings etc. I feel like the mentality is always about how many mics to set up, and what kit you’re running it through, and if you’re recording to tape etc. Don’t get me wrong as this is obviously very important, but also don’t forget that some of the best music in the World, especially in regards to hip hop and dnb is made on some of the most budget equipment, its about the understanding of how to capture, use and manipulate a sound that is massively important. During our talks leading up to the actual recording, all we talked about was how we would prep the kit so that it represented the sound that we felt was key this product being unique. Lets be honest it was all about tape, but not the Studer, or Ampex type of tape more like Duck or Gaffa tape, the sort of tape that fixes anything. Also the room, and the items in the room, the resonances in the room and if they were unwelcome how could we remove them before recording so that little to no surgical work had to be done to fix the issues that don’t exist. Spending a good few hours before recording we hit each drum and listened to the room and how that drum interacted with everything, and dealt with each piece individually until we were left with a skeleton kit of a Kick, Snare, Hat, Ride and that was it. When we made the sound much more dry and dead all of a sudden all of the tiny nuances in each hit became audible, the hi hat began to play a tune, instead of ringing out and causing endless resonant spikes which work their way into the snare hits etc. In my years of experience of chopping breaks this has always been problematic, hearing that same 1.3k ring in the snare, alien to the sound itself drawing the ear in a way that is unnatural and unpleasant, something that would go un noticed in many styles in music but not in Drum and Bass, as soon as you hear that snare 435 times at the forefront of a tune, trust me you’re hearing that ring.

Unbelievably, yet also believably this was the answer to my prayers, the time spent dealing with the kit in this manor really paid off, all the rings and unnatural resonances I had been hearing in samples used in Addictive Drums, BFD and various other sample packs were gone, finally I had control over the source sound. Currently we are only part the way through the processing and producing of the 27GB of  drum recordings obtained on those days, so bare with us, and also keep an eye out for a more detailed post on how we produced the drums after the recording process to get them to the point of being useable with a variety of tempos and genres.

Below are some pictures from the day showing some nifty little techniques we used, hopefully these pictures and explanations will help spark some creativity inside of you or help with some drum recording of your own! Please always let us know more about what you are up to feel free to share any knowledge or wisdom or just get in touch for a chin wag! – dlr@labsamples.co.uk

As soon as we got to Dave’s studio we started to discuss various ways of getting the kit to sound the way we wanted. Deadening a drum kit to sound super dry, punchy and tight required some slightly unorthodox approaches. We used bits of tissue, old turntable slip mats, bits of rubber and taped them to the kit. We also found that the amount of duct tape used to keep the deadening materials in place also made a huge difference especially to the tone.

– The hats were pretty piercing early on to relation to the other mics so quite a large amount of deadening was used on both the top and bottom hat. We experimented with the amount of tissue under the tape to get the sound we were looking for. By tightening the hI-hat clutch we enabled a crisper more controlled hi-hat. Tom the drummer played a lot of the recordings with brushs which sounded much better than sticks. 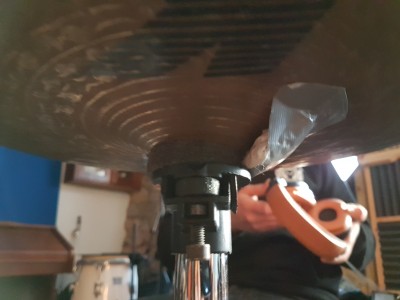 – The kick and sub were recorded using a Sennheiser D12, and the driver of an old NS-10 for more sub. We changed the placement of both mics in relation to how close they were to the beater, this helped us to find the right balance of frequency content as well as ‘weight’ and “punch’. We found that putting the D12 right inside the the bass drum and pointing it down slightly gave us the best sound. Large amounts of bedding were used in the kick drum as well as removing the outer skin. This stopped the bass mics picking up extra resonances that we didn’t want. 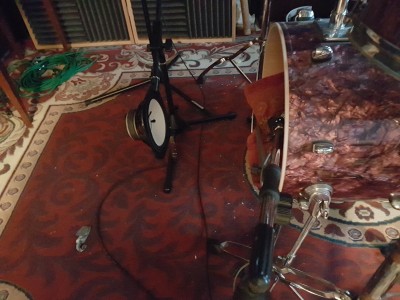 The snare mics were two SM57s with one at the top and one at the bottom. This method worked well with the ‘slip mat’ deadening we were using too. We used a couple of old vinyl slip mats and layered them taped at an angle to the top of the snare. This allowed us to keep some nice body and crunch to the snare without getting the unwanted excessive resonances. It also made for a punchy snare sound without being over powerful and invasive.

Moving the kit mics (some lovely vintage Sennheiser MD21’s) a few inches higher or lower made a massive change to the other all brightness of the kit. We used one at a hight of about 3feet pointing in at the snare from the left (9 o’clock drummer’s perspective), and the other pointing down from a higher angle on the other side of the kit (2 o’clock from drummer’s perspective). Even though our measurements of the mic positioning were rough,  we made sure that the MD21 mics were the same distance away from the drummer’s front.  The Sennheiser MD21 mics produced some of the nicest sounding recordings of the day just on their own, so some variants with these in the mix was paramount. 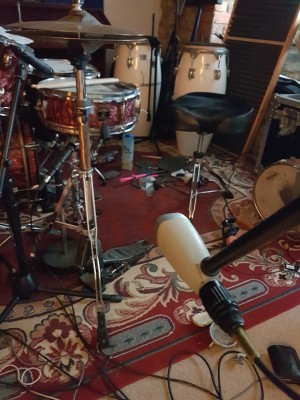 Out of Room Mic

– In addition to the main kit mics we had an ‘out of the room mic’ (AKG C414). This mic being further away from the main kit mics produced a recording which was delayed slightly. When gently mixed with the other mic recordings the overall sound became ‘smudged’ whilst adding depth and ‘roomyness’. This can create some really interesting affects when applied. 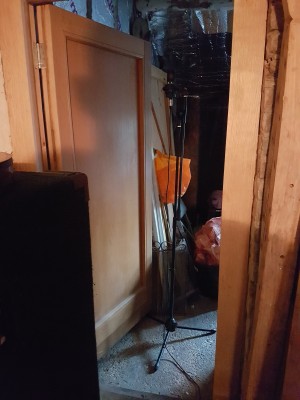 Be patient with us the pack should be ready before the summer, but until then we have plenty lined up so watch this space!

Leave a reply Click here to cancel the reply